So this is kind of a follow up to my post about a Bluetooth remote. I’ve thought of a use-case-scenario.

I’ve been thinking a lot about those big mountain bike jumps at the lake Cunningham sports park from the western qualifying races. The ones that EUCs can hit really well but Onewheels can’t at all. I felt like I was really starting to nail the trick for getting to the top of many of those ramps but there were several more that were just impossibly steep. The problem is more nose tilt than speed - it can’t get up and out of the way in time.

I just can’t help but feel that a remote trigger controlling nose tilt would be SO helpful on those types of ramps. Being able to tilt the nose up at the ramp ON command rather than waiting for dynamic torque, or any sensor for that matter, to lift it. We could learn how to anticipate the response of the board and time it so that we don’t get tail drag either.

Imagine combining that with a quick surge in power, beyond the necessary extra power needed to tilt up your board at speed. I’m talking a momentary throttle override to add extra juice into the jump. Obviously that defeats the self-balancing aspect of the device but if you’re already braced for a jump and will be in the air a moment later I think it could work. Landing will be… well I’m gonna worry about that later lol.

Now, perhaps that’s crazy talk with the current hardware and is still a long ways off. Probably. Maybe? I just can’t help but see extreme onewheeling into pools and vert ramps in the not too distant future if this can be solved. That, and probably a lot of IMU challenges with balancing a board sideways on a ramp haha.

But for now I’d LOVE to experiment with some sort of real time feedback from an input device. I wonder what kind of unusual settings could prove fun to play with? Can I live adjust board tilt with Float Control? 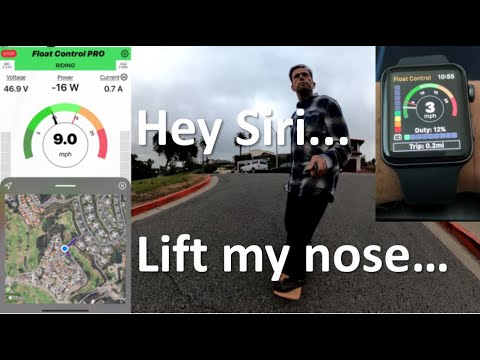 I don’t think remote nose tilt will really help in those extreme situations. It feels strange going up a steep incline using a high elevated nose as you still had to push it for acceleration. I’d rather think of a mode in which you don’t use much breaking amps and keep it balanced yourself. For pump tracks and pools you should only push and roll and don’t break.

The vescmann himself!!! Thanks for the feedback.

I was thinking the remote nose tilt adjustment would need to be very responsive. The main problem hitting some of these steep ramps is that the nose physically can’t clear it. The trick is to lean forward while kicking down on the back while lifting the front nose. However, this only works to a degree before the board’s balancing/braking slows you down too much.

Are you suggesting that by applying less braking power, you can physically override the board angle without losing momentum at the top of these jumps? I can see this working!

I just can’t help but feel like I’d still want responsive control over SOMETHING in the board. Maybe like a throttle boost? Some sort of switch to throw full power at the motor and you just have to balance atop the rocket? I imagine hitting Boost at the start of a steep ramp and, as long as your balance and footwork are good, just soaring over it! I keep seeing EUCs pull off crazy jumps and wonder what it’d take for a onewheel to do that too.

Would really really like to see you show off this feature now that it’s in the main release firmware!!!

I’ve been wanting to! Been extremely busy, and combined with a back injury as well as unridable weather here in Ohio, you probably won’t see much from me personally for a while haha

Just been thinking about this for fun. I think that a handheld remote to lift the nose is the state of the art and the best way to implement for now. But that really detracts from what we all love about the board and that is the feel. Uphill and downhill has always been a particular sticking point with me because the board feels kind of like an escalator compared to a skateboard or snowboard. ATR helps with that a lot. I think it would feel really cool if the nose tracked with the distance to the ground for an even closer feel to the terrain.

I’ve thought of two strategies that probably wouldn’t work but maybe it will give someone else a good idea. First idea is an antenna like insects have. The antenna would hang beneath the nose. Shaped, angled and flexible in a way that it does not get caught on the terrain. As the antenna deflects it effects a position sensor in the board and the board reacts appropriately. I expect this would not work so well in very rocky terrain but if IMU noise can be handled maybe so could this.

Another thought is to use an ultrasonic distance sensor like this MB1623 HRLV-ShortRange-EZ2 | MaxBotix Inc. This is more sophisticated and would have a cleaner look than the antenna but would probably suffer the same issues regarding noise and rugged terrain. I imagine grass would really confuse it.

Finally, I agree with VESCmann regarding pump tracks. I really thought they would be more fun than they are. I wonder if it is possible to discern the IMU conditions that occur when you drop in to safely weaken the braking power temporarily.