I’m running atr v18 firmware and when I put my multimeter on servo pins I get 5v on all the time even when I turn the buzzer off in settings. Rolled firmware back to stock no problem. Tested on another lfocer I haven’t used yet and same results.

Then I swapped to firmware v4 and it did the same thing. beep all the time. Finally I uploaded the stable osr imu fix firmware and it’s good no beep. Has anyone else ran into this issue or I’m I missing something?

Which VESC are you using?

Lilfocer 3.0, and I have two of them. One stock never loaded firmware. But after the testing I’ve have concluded it has to be missing in the firmware, V4 and atr18.
I tried to compile the code myself and that was a nightmare and I didn’t get far. I need to learn for sure.
Unless someone else has a buzzer working on pre build firmware I don’t know what I’m doing wrong

That’s really odd because I never build a board without a working buzzer, and all my firmware versions do include buzzer functionality. And I’m using LFOCv3’s daily

Btw, wdym no problem on stock? Stock has 0 buzzer functionality, so there SHOULD be a problem. Also, how do you measure 5V on the servo pin? The servo pin can only output 3.3V

Yes I mean the servo pin isn’t putting out constant power on osr version of firmware. if you turn servo function off in app, then no power to servo pin. But on the newer firmware v4 and atr18 it’s on forever and I can’t turn it off. Idk why I’m getting 5v but that’s what I got from both controllers. Nothing else was plugged in besides switch for power tested off the back of the PCB to rule out my connector having a short. I’m kinda lost here

I don’t believe there’s 5V till I see it - maybe share a video of how you’re actually measuring this?

https://drive.google.com/file/d/11jt8QkB87hpg5RLNru4mnMd-aczjbqpc/view?usp=drivesdk
Heres a video let me know if you can see it 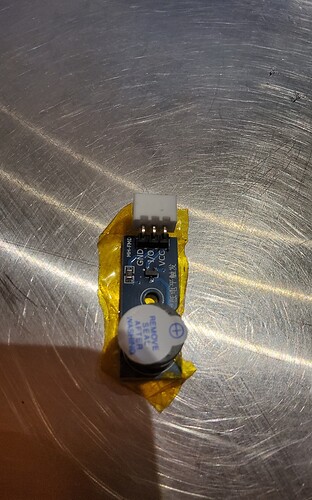 So here is my buzzer, do i somehow have the wrong type ? Its an active buzzer

I ordered those from Amazon too and cannot get them to work, I had to take the little buzzer module off and use it directly (not using the 5V pin) which is unfortunate because it now isn’t very loud…

The “grove active buzzer” however definitely works like a charm!

Oh i was going crazy and definitely barking up the wrong tree. Looks like i need a high level trigger not a low level trigger buzzer. Thanks for dealing with my nonsense hopefully this helps some other lost soul